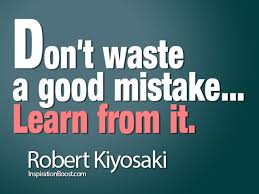 I need to get something off of my chest so this post may be a bit of a rant but it may also be something that you can relate to as well. A few months ago I was talking to a friend and we were talking about my current financial crisis that I’m in the midst of and she was giving me some advice on ways to start trying to dig myself out of this hole (because nothing I have been doing has been working thus far) and I started to point out a few mistakes that I have made in the earlier part of my writing career and basically my earlier adult years and she promptly stopped me and told me that there was no point in regretting those things because if I changed even one of those things it could’ve altered where I am now and that perhaps this is where I am supposed to be at this point in time.

Now I get that and I understand the whole not living in regret thing because it’s essentially pointless but I feel like I just needed to get some things off my chest at that time and I wasn’t allowed to. Granted saying those things out loud won’t change them but I feel as though saying them, acknowledging where my missteps were, will allow me to see where I may have taken a left when I should’ve went right and where I may have gotten off track at. So since I couldn’t say these things that day I am sharing them with you guys because I need to acknowledge them so that I can begin to correct certain things.

The very first mistake I made, not counting all of the dumb teenage stuff I did when I thought I was grown like getting a credit card at 18 with no job and no way to pay the bill (yeah, don’t do that), was flunking out of the first college that I attended and not working my way to get back in there immediately. Now note that I’m not saying that flunking out was the mistake (I mean it was but I digress) because that came with trying to adjust to college campus life and living on my own, being my own keeper, and trying to fit in and get my work done (obviously the school work part did not win out in that scenario).

However, I should have never just let time keep passing by without working my way back into that school, and finishing up my dual degree program when I was initially supposed to because then I would have had internships lined up and been able to get right into my field of work straight out of college. Now I did eventually go back to school and get my degree (well two degrees), but it was much later and I was definitely not a spring chicken and they don’t give internships to people who aren’t still in their early twenties.

The second and arguably the more damaging mistake I made that I now regret is when I left the “regular” work force and thought that I was somehow ready to do freelance writing full time without a proper safety net and financial cushion to fall back on. I mean I did well at first but as any of you freelance writers know there are pitfalls that are just inevitable with doing writing full time and not only did I not have enough multiple streams of income set up to make this work but honestly I didn’t know enough about what I was doing on the marketing end of things and that naiveté cost me.

Okay now that I have acknowledged those two major mistakes I feel better. I can see where I went wrong and what I should’ve been doing in those areas and I can make any adjustments that I need to make to change the trajectory of the course I am on. I don’t think that we should dwell in the mistakes we make and on the regrets that we have but that doesn’t mean that we can’t acknowledge those mistakes and regrets so that we can actually move pass them. If we never say where things went off track at, how are we truly supposed to correct the problem and get back on track? If you have a friend or just someone that wants to vent to you about some things that they need to express, just let them. It may be exactly what they need to do to get themselves going back in the right direction. Until next time… #BeEncouraging #BeaListeningEar

2 thoughts on “Mistakes Don’t Make Us Who We Are”