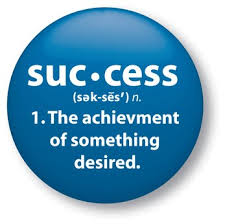 I read an article the other day about signs that you are in fact succeeding in life even if you feel as though you are not. Before I even began to read it I was already guessing that more than half of the signs on their list were going to be things that I have not accomplished yet. I have this idea set up in my mind of what determines if someone is successful and in my eyes I am nowhere near the level of success that I had hoped I would be by now or that I think I should be by now. I have a long way to go before I get half of the things on my list accomplished. However, after reading this article I can see that maybe my evaluation of what is successful was a little off.

This article described being a success as being someone who has had growth in themselves, in their personal and professional life, in how they deal with things. It described success as having family and people that cared about them and people to lean on for support. It described being able to feel like home in whatever place you reside and raising the standards you have for yourself. It described a great deal of things that I never even thought would be someone’s idea of successful, it certainly wasn’t what I had in my mind under that label.

I’ve never been all about making money but let’s be honest, when most people think of their level of success, money is certainly a factor. It was never my absolute desire to be rich with massive amounts of money (not that I would turn it down if the opportunity presented itself) but to live a life that’s comfortable where I don’t have to worry about having enough for me and my child, yes that would be nice. When I ran down the list in the article I realized that 20 out of the 25 things on it I could say were true for myself. It made me sit back and think that maybe I’m not failing at things as badly as I often times feel that I am and maybe what I see as not having it all together, someone else sees as having it together enough for the moment I am in.

I think that sometimes we get these ideas in our heads of what the standard of success and fulfillment are and we don’t realize sometimes that the little things that we are taking for granted could be so many other people’s ideas of what success is. We think that simple is not the answer but sometimes in this life, in the moment that we are in, simple is more than enough. I think that I am going to start viewing my ideas of what having it all really means and whether or not having it all is truly someone having it all. All of what would be the important question.