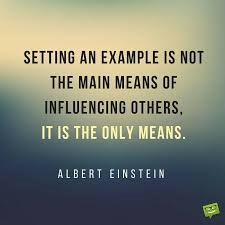 So in the message this past Sunday my Pastor was talking about making tough choices and being accepting and committed to whatever stage of life that you are in at the moment. He pointed out that you need to basically lean into that stage while you are in preparation for the stage that is coming next. He highlighted that there are essentially three stages of life: 1) The learning and development stage; 2) The teaching and being an example stage; and 3) The stage in which you leave a deposit. The stage I wanted to discuss in today’s post is the second one; teaching and being an example.

Now of course I would stay in the learning and development stage forever if I truly could, and in essence aren’t we always learning and developing (we should be anyway). However I believe that the stage I am in, reluctantly, is teaching and being an example, and I say reluctantly because the idea that I could be an example to anyone seems both impossible as well as terrifying. On the one hand yes I always want something that I say or do to be inspiring and motivating and encouraging but do I ever really think that little ole me can inspire others, not really. And yet, as I have started my YouTube channel I have surprisingly found out that I actually have inspired other people and provided some type of motivation for them and that is exactly what I wanted; isn’t it?

The truth is that you never know who’s watching you. You don’t know who might be looking at something that you’ve done or listened to something that you’ve said and gotten something really inspirational from it. Something that made them go out and be even more amazing than they already would’ve been anyway. It’s why I don’t take the words role model lightly and of course I want to be one to my daughter but the idea of maybe being one to other people is a bit daunting.

Don’t get me wrong, I want to be that person. I feel that is a level to the purpose that I am here to fulfill. It’s just scary, and I think that I’ve been a bit resistant. It is both the reason I wanted to do YouTube while also being the reason I was hesitant to do it, because I am forever telling myself that I don’t have anything that I can teach anyone and nothing that I do or say will matter to anyone. I can’t deny that when someone tells me that they got something from something that I wrote or something I said in one of my videos it feels good and satisfying.

I suppose you could say I haven’t really allowed myself to lean in to this teaching and being an example stage but I want to because while I doubt myself quite often, deep down I really do feel I have so much to offer others. Even if it’s in terms of my experiences and mistakes that I’ve made so that people can at the very least know what not to do. I suppose this would be the time in my life to use those struggles and hardships that I’ve had for the benefit of others so that maybe they can do something different, something better.

I thought about being a teacher when I was little (for a hot second) and the reason I didn’t pursue that goal was never because I didn’t want to be an inspiration in other people’s lives, it was more so because I didn’t think that I had the tools inside of me to actually BE an effective inspiration in other people’s lives. I see now that by just being me, by accepting the stage of life that I am in is a far greater tool than I ever realized. You may be resisting the title of “role model” but whether you realize it or not, someone is always looking at what you do. Lean into that stage. Take up the mantle and make sure that when that someone is looking at you, you’re proud of what they are seeing. Until next time… #BeInspiring #BeMotivating #BeEmpowering