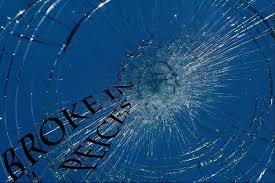 With 3 days (maybe 4) before the official start of Spring, mother nature decides that it’s going to snow again (at least where I live anyway).  Proving just how unpredictable the weather can be.  Just as the weather cannot be easily predicted, even with meteorologists to scientifically decipher things, neither can people, nor circumstances.

Curveballs are thrown at people all the time and just as you think one result is going to occur, life happens and you get a completely different outcome, sometimes good and sometimes bad.  It seems that I get hit with way too many curveballs for my liking, and I manage to catch a lot of them before they hit the ground, but others, especially lately, I have not managed to catch so seamlessly and they have not only dropped but shattered right in front of me.

I would like to just sit there in the puddle of my mess and just cry, let it all out, and give myself time to pick the pieces up and reassemble things again but truthfully I don’t have that kind of time to waste.  And I keep thinking, what if those pieces, the one’s lying right in front of me, aren’t meant to be put back together again, at least not as they were once assembled.  What if I am meant to reshape and reform the pieces to produce a completely different reality for a different outcome?

Maybe that’s where a lot of us go wrong.  We keep trying to step back to what was working before and get it back to where it’s working again, not realizing that maybe it worked for that time period, but a different season may call for a different way of working.  That way might have been perfect a month ago but in this moment, a month later, you may need to rethink your whole game plan.

There’s this saying that if it’s not broke then don’t fix it but sometimes things need to be broken in order for things to reshape themselves to work in a different way.  True, something may not be broken, per say, but if it is not working properly, or moving you forward somehow, then is it really in working order.  If all you are doing is maintaining the moment you are in then yes, it may be working in terms of the fact that you’re maintaining but shouldn’t you be progressing to that next step.

We are not meant to remain in one moment indefinitely.  We can’t just stand in one place our whole lives if we expect great things, if we expect for our dreams to come true.  Dreams don’t come true by standing still.  We only achieve them by moving forward.  So yes there are some things that may be in pieces but don’t try and put the pieces back as they once were.  If they’re in pieces chances are things weren’t working the way they were supposed to.  Reshape those pieces and reassemble them in a different way.  Put things in working order to keep you moving forward.  Be blessed and march on!