“There is no passion to be found playing small—in settling for a life that is less than the one you are capable of living.” 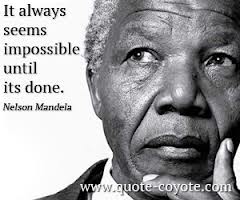 The world has lost a great and powerful influence and the example for how to live life free of anger, and bitterness, and the true meaning behind forgiveness.  Nelson Mandela was undoubtedly strong and brave and showed a great love for his country and a great passion for the rights of people in general.  However, even more remarkable than that was his ability to not only forgive but to let go.

A lot of us can forgive but the letting go, the casting it out of our mind part, is always a little harder of a task to achieve.  That is not to say that Nelson Mandela ever forgot being wrongfully imprisoned for 27 years of his life, but just that he didn’t let it dictate his actions once he was released.  He could have been angry, he could have been bitter and he could have been depressed because he had more than enough reason to be.  But that’s not how he carried himself.  He forgave the people who wronged him and he continued on fighting for the people in his country and the human rights of people in other countries as well.

It puts things in perspective when you look at the man that he was because in all of our lives, while our struggles are not to be minimized or to be treated as if they are not indeed a struggle, they are still nothing that we should let stunt our growth as human beings or our growth in fulfilling our purpose.  This man sat in a prison cell for 27 years of his life and is still leaving behind such a huge legacy.

None of us knows what tomorrow holds and I am not saying that we should not think about the future that is in store but we still have to concentrate on moving today in order to get there.  I’m saying this as much to myself as I am to all of you out there.  Stop worrying about what you can’t get done today and start focusing on what you can get done.  Don’t waste this day on the negative thoughts running through your mind.  What you do TODAY counts!

2 thoughts on “The Lesson I Learned From His Example”