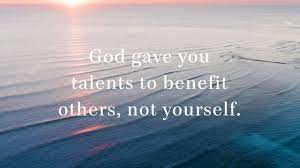 I do daily devotionals and have done a pretty good job of making a habit of reading my devotionals and my bible readings for quite some time now. It is a welcomed part of my spiritual journey and growth and something that I had convinced myself at one point in my life that I didn’t need to do. Yesterday after listening to a message from my Pastor about obeying God’s will I read in my devotional about answering the call that God has placed on our lives and obeying the voice of God and not the whispers of Fear.

It got me to thinking about how many times we dismiss the gifts that we inherit from God and how much time do we waste ignoring what we know we’re called to do and fighting that calling. More importantly it made me contemplate how many people’s lives do we miss the opportunity to touch and what that means because we didn’t act soon enough?

When I was younger and realized that writing was my passion and my gift I thought that it was mostly because it was the outlet I needed to release some of the emotional pain I had to deal with in my childhood. Not that I don’t write for the readers and to of course tell the stories living in my head but I felt very silenced as a kid and that was my way of using my voice. I’m not sure when it was exactly that I realized that my writing actually helped other people but at the moment that I did I shifted the way I thought about what I wanted my writing career to do.

I had one major goal prior to that realization and that was to make the New York Times Best Seller List. However that has shifted to how I can use my words and my writing to effect change in the world, or in people generally.  Now, yes my writing is still and always about the stories I tell, but everything that I do within my writing career is about what it can do for others and how I can help others. With my YouTube channel, with my magazine, with my up coming podcast, with the products I’m creating to sell, it is about making other people understand that someone sees them.

I can’t imagine what it would have been like if I hadn’t realized early on what my calling was and if I had just ignored it. It wasn’t like I didn’t think of other career choices when I went to college and I do after all have a Master’s in Psychology and a Bachelor’s in Communications so it isn’t that there aren’t other avenues that I could have taken, certainly they would’ve provide more financial stability. But I knew what I was put on this earth to do and while I had to figure out exactly how my calling could make a difference in the world, I knew that I wasn’t going to give up on what I truly felt God put me on this earth for.