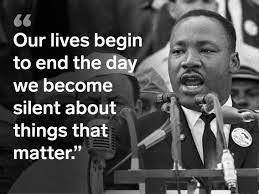 Today we remember the dream that Dr. Martin Luther King Jr. had all of those years ago when he gave that I Have a Dream speech. While I don’t normally repost old blog posts, I couldn’t get past the fact that what I wrote last year to commemorate this day STILL applies, even more so, today. I want to leave you with those same words today and remind you that we are not finished yet, not until we can see his vision for the dream that he had all the way through. We cannot give up on a fight in which he literally gave his life for. I hope that something in this post inspires you today to keep striving towards the goal of making his dream of a better and more equal America come true.

Is There Still Hope for The Dream?

I wasn’t sure what I wanted to say today but I knew that Dr. Martin Luther King Jr. was going to be the subject of this post. So, I went to pull up the full “I have a Dream” speech on YouTube (https://www.youtube.com/watch?v=smEqnnklfYs) because it’s been a long time since I’ve heard the speech in its entirety. As I sat there listening, it was mind blowing just how relevant and powerful his words still are to this very day.

Now I don’t know if that is telling to the staying power of his words or to the sadness that they still ring true. In essence, we may have come far but within these last few years we seemed to have taken several steps backwards.  I guess you would have to listen for yourself to determine which one it is for you. For me it’s a bit of both. Yes of course those words he spoke that day still matter, even more so now, because before the last four years we were starting to see some of those dreams manifested and brought to fruition. Or were we?

We thought that we had started to see some change with President Obama because he was someone who truly took those words of Dr. King’s to heart and he embodied them and strived, with much opposition, to make those dreams a reality. We thought we had come farther, but within the last four years we have seen certain strides that were taken being walked back immensely. It makes you wonder, had we really even made any change? Was it all surface accomplishments but underneath, the roots, were still very present and had not yet been weeded out enough to allow sustainable growth?

That day on August 28th of 1963, Dr. King said that America needed to pull itself out of the quicksand of racial injustice in where people of color lived on an island of poverty amongst a vast ocean of material prosperity. He points out that America had not kept its promise to us and that it was in for a rude awakening if it expected things to go back to business as usual.  I think that he would be disheartened to see all of his words continually quoted by people who clearly have no deep understanding of what they actually mean because if they did then they would see that we only seek “the riches of freedom and the security of justice.”

I think if he were still alive that he would find himself having to repeat those same words he spoke to those gathered around the Lincoln Memorial that day. I think he would feel obligated to remind the entitled groups of people who think the rules don’t apply to them that equality is not wrong, it is not unreasonable, and it is not unattainable.

I think he would also turn to those who have grown weary and tired, and yes complacent amongst those who would like to revert back to a time that our ancestors struggled so hard to lead us out of and tell them to keep moving forward. I think he would tell them that we cannot be satisfied with the status quo, and we most certainly cannot leave this country in the fragmented state that we find ourselves in today. I think that he would remind people who are angry because we’re still explaining that we just want equality that they have to continue to strive for freedom but not by “drinking from a cup of bitterness and hatred”.

The song that plays at the very beginning of the recording of his speech is “We Shall Overcome” and as I listened to the words in that song, and replayed the words of his speech, I have to say that even in the current state of this country, I still have hope that we will be okay. I still think that Dr. King’s Dream is going to come true, someday, but we can’t give up, and we have to keep moving forward, until we are all Free At Last.