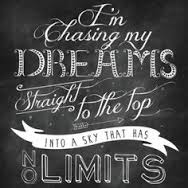 I realized when I woke up this morning that I am still not having the rate of production that I want so far this year. There’s something else I realized too. I cannot handle the thought of failing at this. Not failing in general with various tasks that may fall through or fall short of what I expected. Not failing simply in terms of getting thrown off course and sent in a different and unexpected direction. Not failing as in not completely fulfilling all of the larger than life goals that I have for myself.

I can handle all of that because I have learned (and read from many successful people) that failure is a part of succeeding, quite possibly a more vital part than people realize. What I absolutely cannot handle failing at is the overall goal of fulfilling the dream I have had since I was six years old of being a writer, and not that person who has a full time job and writes as my side gig (not that there is ANYTHING wrong with that AT ALL). I don’t want to have to go back to having to balance both the fulltime job and my writing dream because when I had to do it before it didn’t work for me at all, on any level.

My dream was to make a living as a writer and that I was going to influence this world, even if it’s only to a small sum of people, in a major way. I have too many people who doubt me, including my own mother, and most of my entire family, and I refuse to prove them right in any way. Now me succeeding and making my dreams come to fruition is definitely not about proving anyone else wrong (not solely) but we all know it’s a bonus when you can do something everyone said that you couldn’t.

I have my plans set and my projects that I am supposed to be completing for the year set and they seemed so achievable when I wrote them down. However, January is almost over and I don’t see where any breakthrough has happened yet. I know I have to be patient but did I ever mention that patience is not really my strong suit. I have been at this so long and the journey has been quite daunting and tiresome and when you have people in your ear questioning you on whether you should just go ahead and give up or admit that it’s just not going to happen quite the way I want it to, it can be really frustrating.

I won’t give up on this vision of mine, largely in part due to this nagging feeling in my gut that keeps telling me that I’m on the right path, even if it doesn’t always feel like it, and to not give in to what other people think is best for me. The other reason I won’t give up is because this is the purpose that God has given me in life and I won’t turn my back on that purpose. I’m strong enough to persevere and as for the patience, well I’m working on that part (lol) but I won’t back down from this dream.