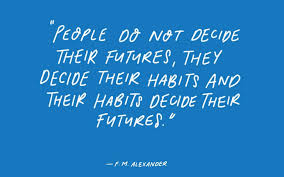 Wouldn’t it be really nice if we could just balance out all of our habits to work all in one accord with one another? Or am I the only one who, when I further develop good consistent habits in one area other areas begin to suffer? A couple of years ago I had been vigorously working out, consistently and faithfully, and I had been on and off with the habit but around that time I had finally gotten my shit together health wise. I cut out most of the unhealthy foods; I don’t really eat a lot in terms of quantity but I had gotten really good at keeping my diet on track; I even got to the point where it just felt wrong to not go to the gym and work out. But you know what wasn’t as consistent as I wanted it to be then? My writing!

Cut to a couple of years and two car accidents later (one in which I was hit walking across the street by a truck) and my working out has obviously grown stagnant again and my diet, well we’re not even going to get on that (I mean I still eat mostly health but I’ve snuck a lot of the junk snack food back in somehow). I can’t workout as hard as I used to and definitely not everyday like I used to because of the physical issues that stem from the accidents that I keep messing up my recovery from because I’m hard headed and I tend to try to exercise as hard as I used to and then I re-injure myself which delays the healing. It’s frustrating as hell and I was at least going to the gym to do some strength training but then the world shut down and even though the gyms have opened up again I personally don’t feel comfortable going back right now until they get a better handle on COVID.

That said, my writing habit has never been better (well not since I was a college student anyway) and I am continually developing my writing routine to work better and better and trying different methods to determine if there’s routines that work even better for me. Although I have not found a solid writing routine that I can use day after day, I have still been extremely productive and I am absolutely loving the work that I have been able to get accomplished and it’s been wonderful. But again, when one habit is strengthened the other one (working out) seems to fall by the wayside.

Is there some secret to balancing everything so that it all works together? If there is I want to know because it frustrates me to no end to struggle in something so much, finally hit my stride, and then get the other thing I’m struggling in on track only to fall off track with the first thing. I suppose in this case my physical limitations have played a part in my falling off track with the workout but the perfectionist in me just says I need to suck it up and just push harder anyway (until I’m exercising and then my knee or my back will quickly let me know that I’m doing too much).

I suppose that just means that the area that I really need to work on most is the one in which I realize that I am not Superwoman and I can’t do it all and that I can’t just ignore what my body tells me not to do. I suppose balance is all in the hands of the producer (lol). Well that is my Monday rant and I really would like to know what you guys do to find balance in your life with the things that you love to do? Until next time… #BeProductive #BeMotivating #BeInspiring