Let’s talk about consistency! Do you remember when you were a kid and you discovered your passion, your dream. The moment when you realized that you actually had the talent to do what you dream of doing. You see others doing what you are only dreaming about at this beginning phase and it seems as if they have everything all together and sorted out and to you it would appear that they gained their success fairly quickly because of course you don’t see all the hard work that went into how they got to where they are.

You immediately think, well I’ve got talent just like they do and so it shouldn’t take me long at all and I think I could become an overnight success. When you’re just starting to work towards your goals you have this strange notion that talent will actually be enough and everything else can follow later. Of course when you get older is when you start to realize that there is some hard work and effort that goes into making your dreams become a reality and you start to come to terms with the fact that being an overnight success isn’t really possible.

Success comes in baby steps and it comes with a large dose of consistency. You are never going to get where you are trying to go by thinking that giant leaps are the only way that you are going to get there. Most of your journey is going to be taken in baby steps and you have to remain vigilant in your pursuit of your goals. There is no such thing as an overnight success. Even those who have managed to make it happen quicker than others, still didn’t achieve what they gained overnight.

So the next obstacle that gets in your way, and slows you down, don’t quit. Don’t just stop in your tracks and allow yourself to get stuck, or worse to turn around and move backwards. If you come up against an obstacle buckle down and dig your heels in deeper. The road is not going to be smooth the whole way through but if you keep pressing forward, and keep taking smaller steps at a time instead of trying to take these long strides you will reach your destination in due time. 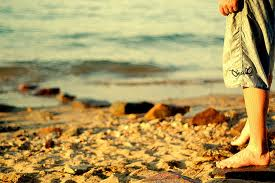 I was working on a pitch for a guest post yesterday (cross your finger for me that it gets accepted) and within that post one of the things that I advised readers to do was to think of all of the things that they are afraid to do, or things that they said at one point in time that they would never do and still haven’t done yet, and make it a goal this year to go out and start doing those things.

It dawned on me this morning in talking with a friend about needing to broaden my horizons and experience different places that I needed to do the same thing.  There are quite a few things that I always said that I would never do, or that I thought that I couldn’t do for one reason or another, and I think that I am going to take my own advice and start doing them.  Now they may not be big things (at least not yet, have to work my way up to those) but there is nothing wrong with starting small because even baby steps allow you to move forward.

There are a lot of you out there who have those little things that you always said you wouldn’t do (ex. go on a boat, go hiking, learn how to swim, etc.) but what if you going out and doing those things, even if it was just one time, is the experience you’ve been missing from your life.  I mean if it’s something that you discover you don’t like then you never have to do it again but at least you can say you’ve done it.  However, if it happens to be something that you find out that you love to do then it can open up a whole new world of experiences for you.

When I joined a gym (one thing I said I was never going to feel comfortable doing) a few years ago I said I was not a runner and I would never use the treadmill because I didn’t like to run (mind you I also said I didn’t like to exercise either but I love it) but when I got on it I first discovered that I could run and then, surprise of all surprises, I actually liked to run.  Now how would I have ever known that if I had never just gone ahead and done it.  Now I love to run (still working on the running outside part—maybe that’s something I’ll do this year) and I miss it if I don’t get to.

So take some time and make a list of all of the things that you have been ruling out thus far.  Make some plans to maybe not rule them out just yet.  Allow yourself to be open to the new experiences, especially the ones that scare you.  Those are the ones that you will learn from the most.  Have a blessed and exploratory weekend!