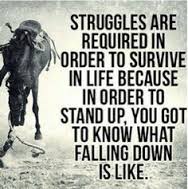 When I saw this post on Facebook I had just been thinking about how much I am getting tired of falling down (metaphorically speaking) on this journey of mine.  It gets frustrating when what you want is right there, you can almost reach it, it’s so close but the closer you move towards it, it only seems to move further away.

If you’re like most people, you begin to question the end goal, wondering if it’s what you’re really meant to have, if it’s even what you really want.  Then you start to doubt if it was every what you really wanted to begin with (okay well I’ve never doubted wanted to be a writer, just whether I had the ability) or have you just been trying to convince yourself of that.

But the reality is that if you were handed everything that you wanted, on a silver platter, so to speak, and never had to work hard to get there, would you really be able to appreciate finally achieving it.  There is something to be said for hard work and struggling to get ahead.  Once you know what it’s like to fail, to fall down often (in my case continually), to have to keep pushing through all the pain and all of the people who are going to tell you no, you don’t take it for granted when you finally get that yes and when you finally get to that level that you are trying to get to.

I sometimes think that people who were born with all the options afforded to them and who don’t have to necessarily struggle to get what they want so much don’t really appreciate what it’s like not to have it.  It’s hard when you keep getting knocked down.  Honestly, sometimes you just want to lie there and not get back up because you just get tired.  But of course staying down is never an option, at least it’s not the one that’s actually going to get you where you want to go.

So if you are like me, feeling like you might just want to lie there.  That’s okay for a moment, but don’t stay down.  Stand up and keep going because the struggle, yes even the part where you fall down, is worth it to get to what God has planned for you.

Today I took my daughter skating.  I thought it was a good way to end her spring break and I thought it would be good fun for her.  I hadn’t intended on skating as well, I just wanted to sit on the sidelines and watch her hold onto the wall as she made her way around.  Just as she did the last time I took her skating, which was two years ago for her birthday, she asked me to skate with her.  I told her no because truth be told my knee was really bothering me.  I sent her out into the rink and watched her take about five minutes (maybe more) to make her way around the first time.

After her first trip around she came to me and said she wanted to go home, that it was harder then she remembered.  I reminded her that we don’t quit on things just because they seem hard at first and that the only way to get good at anything was to keep going back out there and trying.  I assured her that she would get better at it just like she did the first time we went skating and the time she went skating with her class at school.  It inspired me to go get a pair of rental skates myself (I hate putting my feet where others have been) and make my attempt to skate with her, as she requested.

Now I used to be a really good skater back in my teenage years but other than the attempt I made two years ago I haven’t really skated and with all of the aches and pains settling in within my body I get nervous at the thought of skating (or at least the part where I fall).  I was truly terrified to get out there on the floor of that skating rink but I did it and pretty soon I was even able to let go of the wall, at least some of the time.

I believe that seeing me get out there and not giving up even inspired my daughter to let go of the wall a few times herself.  I even noticed her gathering speed a couple of times, but she didn’t want to quit anymore.  In fact when it came time to leave she didn’t want to go.  I made a promise to her that we would go skating more often now.  I had actually started to have fun myself and I forgot just how much fun skating was.

The thing about skating that I can relate to real life experiences sometimes is that it has a lot to do with being resilient.  With skating, especially if you haven’t done it in a long time, there is always a good chance that you will fall (in fact unless you are a pro it’s kind of expected), but you don’t have a choice but to get back up again.  You can’t just sit there and give up because you have to, at the very least, get back up if you want to get out the skating rink.

Much like skating, in life when something or someone knocks you down, maybe even literally knocking the wind out of you, you have to get back up.  More importantly, you have to realize that you are going to fall many time but you have to keep getting back up again.  It’s amazing that I got all of that out of skating but sometimes it’s the little things that you underestimate that have some of the biggest lessons for you to learn from.  I can’t wait to get good at skating again and to help my daughter get to that point where she can let go of the wall and go it alone.  Won’t that be something?

By the way I did, in fact, fall, but I got back up and skated around a few more times.  It was so much fun!