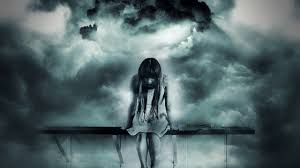 There’s something I have to talk about and it’s not a subject I like to really talk to most people about. This is usually the only place I can be truly vulnerable about it and that’s writing and depression. I don’t know how many of you out there have to figure out how to write while you are battling through a depression episode but I feel like we as writers don’t talk about this enough. There’s this inherent notion that writers, well artists’ in general, are constantly suffering through some sort of emotional crisis and that emotional turmoil is what then fuels their writing and I really used to think this was just a horrible myth that I wanted to ignore. Now I’m starting to wonder if there isn’t some truth to it, mainly for two reasons.

It’s not that we creative types just have some type of genetic disposition for depression or emotional breakdowns but rather, I think it’s because we tap more into our emotions in order to write as well as taking on the emotions that we attribute to the characters that we are writing about (because yes, our characters are real people to us and they have real emotions that we must convey).

The second reason I somewhat buy into the myth of the artists struggle is more to the point of this post. It’s possible that writers or creative types in general are overly emotional, and are prone to depressive moods because we hold onto our emotions and don’t let them out. I mean sure we can use our writing to let out some emotions but that is a solitary act and it can still leave you feeling alone and as if your emotions and feelings don’t matter.

It is true that writers are known for, and most of the time, enjoy their solitude because it’s typically when the best creating gets done. However, that does not mean that writers don’t enjoy being around other people and venting or sharing their feelings with people that they care about or trust enough to be vulnerable with. If we don’t get those feelings out we tend to go further inside of ourselves and that leads to getting into a funk or a mood that may not in fact be productive or good for their creativity.

For me, it’s sometimes hard to detach myself from my emotions because I think that my emotions are what make me a better, more in tuned writer. On the flip side of that when I am going through an episode of depression, because there are so many emotions that I am internalizing and holding in, it’s harder for me to write.

I think that we artists have to stop holding things in and thinking that we’re just supposed to endure whatever feelings we’re having by ourselves. We have to be just as vulnerable with our own feelings as we are with the feelings of our characters because if we want to remain effective writers we have to learn to let go of some of that solitude that we hold so dear.

So if you’re feeling in a bit of a funk lately, a bit depressed maybe, try finding that one person that you can be open with and getting all of those feelings out. I think that you’ll be surprised at how freeing it can be and how good it will feel to get those emotions out and oddly enough you fill find that it will allow you to be more vulnerable in your writing and in expressing the emotions of your characters. Until next time… #BeVulnerble #BeOpen 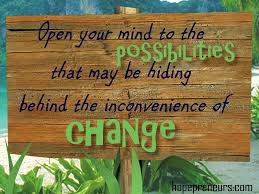 I’ve been thinking over the weekend about change. There are a lot of experts that advise you that change is good and that you shouldn’t be resistant to it. Then you have plenty of experts on the opposite end of the spectrum that say that setting deadlines is a good thing and that having structure and routine is something that can help stabilize someone’s life and help them to stay focused on the journey ahead of them.

I tend to lean more to the side of routine and structure, perhaps I lean a little too far in to it. It’s no secret to anyone who truly knows me that no matter how open I appear to be to change and spontaneity, I am extremely resistant to it. I’d like to say that I’ve only recently grown a barrier to the idea of change but I think I’ve always been this way since I was a little girl. I like knowing what’s going to happen, to know the way the day is going to go and precisely what I’ll be doing and when. That kind of structure pretty much guarantees the same outcome and while that may seem boring to some, it’s also safe. I guess the problem is that it may be a little too safe.

The odd thing is that the kind of life I’ve always dreamed of having for myself, since I was ten years old, could never be possible without embracing the idea of change and being spontaneous. There are a lot of things that I would change about my life and one of the things at the top of that list is my resistance to change itself, and my anxiety over the things that I do not know. So what is the right way to go about things?

Do you go with throwing caution to the wind and embracing every change that comes your way or do you plan and set deadlines and stick to a structure that helps keep you on track? I suppose that is what I struggle with because I want to be spontaneous and accept whatever changes may come my way but then I lose my balance and the shifts that begin to happen don’t allow me to stay focused and on track. Where is the middle ground on change versus structure? Is there a good balance between being overtly open to every changing scenario and still keeping enough structure to stay on course?

It’s easy for me to just say that structure is what works for me and leave it at that but if it was truly working then I would be where I want to be by now. Perhaps the very reason I haven’t reached that next level just yet is because I’m too afraid to reach out and grab the ledge above me because that means I would have to actually let go. To let go is scary. That means I have to trust what’s coming next, in an outcome that I can’t see.

Change is necessary to go to the next step on my journey and I know that but it’s hard to not know how things will turn out. So I guess the question is can I have structure and still fully open myself up to change or am I just going to keep holding on to the things that I already know. I don’t know how I truly feel about letting go of the structure that keeps me so grounded but I guess this year (my year of no excuses) will help me see just how open I can be. 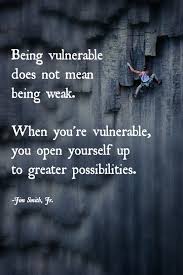 Let’s talk about being vulnerable! There is a certain sense of freedom that lies in being yourself and not caring what others think of what you say or do. Now I don’t mean treating anyone bad or not caring about other people’s feelings in general. I mean not letting other people’s opinions of you and what you do in your life affect how you feel about yourself or how you conduct your life.

Too many times we agonize over, not just the important life decisions that we have to make, but also how people are going to perceive the decisions that we have made. No one else’s opinions should weigh that heavily on our minds. I say this having struggled with the disease of caring too much myself but I have done a lot of work to get to a point where I no longer care about what other people feel about what I do anymore. I mean yeah I take critique and advice but in the end the choice will be something that I want not what someone else wants me to choose.

I don’t think you can truly go for what you want without allowing yourself to feel a certain amount of vulnerability. So when you start worrying about what everyone else thinks about what you’re doing in your life, stop. How other people view you is not something that you should concern yourself with because if someone has their mind made up about you already then there’s nothing you can do to change that. Trust in yourself and who you are and let that be enough to propel you towards your destination.